Apple is a forward thinking innovation-leader in the technology world. They proved it this month by releasing a new unsubscribe link that appears in the header at the top of your marketing emails…2 years after Gmail did the same thing.
We love Apple. Everything we do at Digital Peanut is on an Apple device, other than testing sites and emails. However, we have to admit Apple isn’t always the pioneer we’d like to think they are.

In supported emails, you’ll see this section, above the email itself:

When you click the “unsubscribe” link, a little pop up window will show: 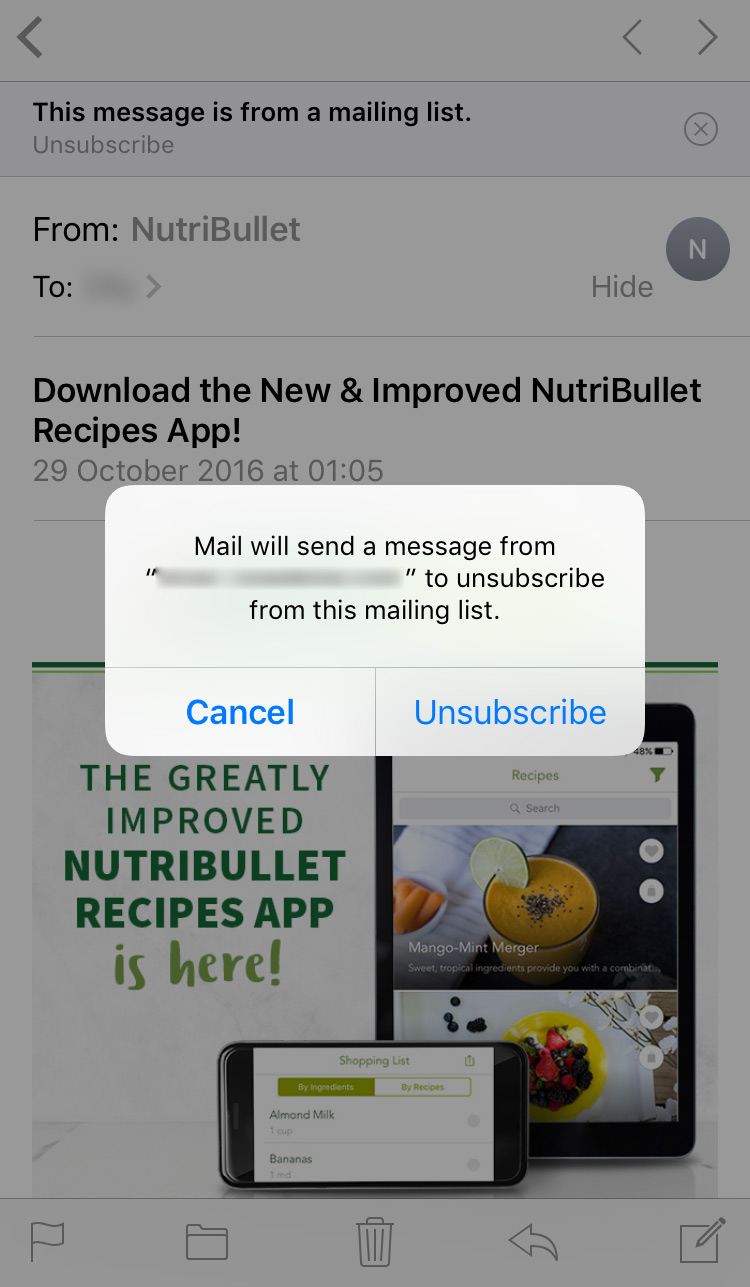 Completing this action will email the sender’s email platform with an unsubscribe message. The sender’s platform will then automatically remove you from their list. It’s very rare for the sender to check each email and remove you from their list manually, so you don’t need to worry about offending your local store who know your name and inside leg measurement. You’ll see a copy of the email in your sent folder right after you’ve completed the action.

Why doesn’t the unsubscribe link always show at the top of an email?

The unsubscribe link won’t show in the header at the top of a marketing email on your Apple device’s mail app if the sender hasn’t set up the link-unsubscribe feature properly. (Read the next paragraph to find out how that works.)

How does Apple iOS know when to show the unsubscribe header link?

There is a benefit to companies by complying with this feature

This unsubscribe process simply sends an email to the sender to unsubscribe them. It’s the same kind of action as clicking the unsubscribe link you (hopefully) put in your footer. Having this link visible right at the top of the viewers’ email makes them more likely to click that, rather than sending a spam compliant to their ESP (Email Service Provider). Spam complaints decrease your deliverability, resulting in more of your emails going to your receivers spam folders. That’s an obvious problem. By making your unsubscribe link more visible, people who want out of your emails can do so easily, thus improving your spam score. It’s as simple as that.

Making your unsubscribe link visible and not obscured within 5 paragraphs of size 2 text is important. You don’t want to invoke people sending spam complaints. By making this feature work with your emails, your spam reputation will only improve more. More emails in the inbox usually means more happy customers!

Dale is very correct. By sending a response they will Spam you more. It has happened to me!

Apple has made little or no attempt to make this “unsubscribe” link actually work. Please read what the message says. It says it only sends a message. To who? What happens when the message gets there? There are two major flaws in using the IOS List Unsubscribe Feature. (1) If the email came from a spammer the unsubscribe message only verifies they have a good email address. They will not remove your address. If anything they will send you more spam. If you didn’t subscribe to the list then don’t unsubscribe. The sender has no interest in removing you. Companies… Read more »